I think my crojo has gone on a temporary holiday. I haven’t crocheted for a good few weeks now. I’ve been full of good intentions but when it’s come to actually grabbing a hook and a ball of yarn, it’s just not happened. The last thing I made were some cotton coasters. I only just got round to taking a photo of them today, they’ve been sitting on the dresser, patiently waiting for their snap happy creator to share them with the world. That’s not like me either, I’m usually there with my iPhone at the ready, the second a project is finished.

My whole coaster journey started in the middle of April would you believe!

And it was on my mental to-do list way before that. Maybe my crojo has been absent for longer than I realised. I can’t remember how long it took me, but I produced a little collection of different styles of coaster.

Quite a happy, bright & colourful sight when I look at them here.

Once these were done, I was then meant to start making a set of each design to build up my stock of ready-to-sell items. Well instead I got stuck into many, many niggly little jobs around the house. You know the ones where for possibly years, you’ve been saying, “I must do that” every time you see it. I’ve actually done quite well and I’m feeling quite proud of my achievements. I’m not done yet but can see the light at the end of the tunnel. My mind is feeling a lot more organised, so I’m hoping if I get a few more jobs done, my crochet urges might come back with a vengeance. I think maybe there’s something psychological going on, like I shouldn’t be sitting there crocheting while there’s jobs to be done. I’ve often felt pangs of guilt when I’ve left dishes piling up on the side while I’ve been hooking away.

Anyway, in very small gaps between domestic duties , I managed to get one set done, it felt like it took me forever.

I don’t know when I’ll get cracking on more coasters yet. I’d kind of like to start work again on a blanket I started over 2 years ago. A blanket for me! I don’t actually have much in the way of crocheted items for me so it would be nice. It is a real labour of love though. I’ll be sure to show you my progress next time, that’s if my crojo ever comes back!

I love old retro and vintage kitchenalia. It stirs up so many memories from my childhood, mainly from being at my grandparents houses, and helping out in the kitchen with baking and washing up. I always remember the enamel bread bin my dads parents had. There was always a lovely unsliced loaf of soft, white bread on the go. I also remember watching one of my all-time favourite tv programmes, The Good Life ( which I’m currently re-watching for the 200th time!)

They too had one of those bread bins, (look in the background of the picture above) I guess they were very popular back in the day. Well, about 7 years ago, my hubby and I visited the beautiful town of Shrewsbury. It’s very picturesque, has some amazing little shops and is just a perfect place to spend a day mooching with your nearest and dearest. It was special too as we were newlyweds and had a rare day to ourselves while the kids were in school. We found this little underground antiques shop and spent ages wandering around looking at all kinds of unusual things. We came across, you guessed it, a vintage enamel bread bin! I fell in love with it instantly, and with my hubby being the generous chap he is, it was whisked to the till and purchased for the full asking price of £18. They certainly made things to last back then, its one of those things that I hope to pass on to the kids one day, that’s if they share my taste in quality vintage items. Doubtful.

Last year, my uncle was having a sort through some of my nan and grandads things, as he moved into their house after they both sadly passed on. He came across their bread bin and immediately thought of me! His words were, you’ve got a knack of turning trash into treasure, but this is no trash. To me, this is already treasure, brimming full of wonderful memories. Because of the distance between me and the rest of my family, it’s taken almost a year for me to get this. My mum brought it up with her on her last visit. Here it is, reunited with one of its family members…. 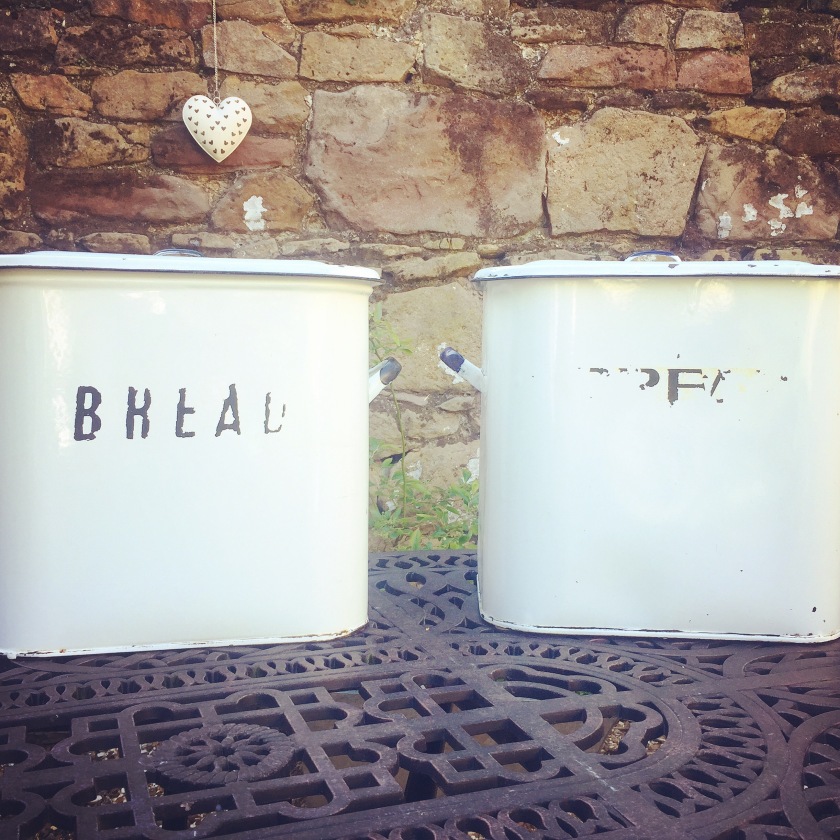 It’s virtually identical! My nan and grandads one is on the right. The font is slightly different, well what’s left of it, but that just adds to the charm. It put mine to shame so I had to give it a bit of a spring clean. I’m not 100% sure what I’m going to use it for yet or where it’s going to live. It’s currently in my dining room being used to store a load of pine cones I foraged the other week from the park ready for doing Christmassy things with. But it could possibly be a yarn store or something equally crafty. Who said bread bins have to store baked goods?

This is a text widget. The Text Widget allows you to add text or HTML to your sidebar. You can use a text widget to display text, links, images, HTML, or a combination of these. Edit them in the Widget section of the Customizer.